VoiceMale Magazine is a pro-feminist publication that began in 1983 as a newsletter for Men’s Resource Center for Change. Over the years, it has evolved into a magazine that explores “critical issues relevant to men’s growth and health while cataloguing the damaging effects of men’s isolation and violence. A variety of men’s voices fill the pages, including “fathers, father figures and mentors, men of color, activist men, gay/bisexual/questioning/trans men, and younger men.” Women’s voices in the magazine serve as inspiration in the work of gender justice. 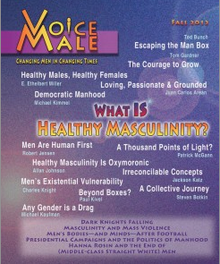