According to the National Cancer Institute, the “Diffusion of Innovations Theory” addresses how ideas, products, and social practices that are perceived as “new” spread throughout a society or from one society to another. According to the late E.M. Rogers, diffusion of innovations is “the process by which an innovation is communicated through certain channels over time among the members of a social system.” Diffusion Theory has been used to study the adoption of a wide range of health behaviors and programs, including condom use, smoking cessation, and use of new tests and technologies by health practitioners.”

Rogers explains that there are different adopter categories that require different strategies to get each group to adopt the innovation. The categories are:
innovators, early adopters, early majority, late majority, and laggards, as shown in this chart: 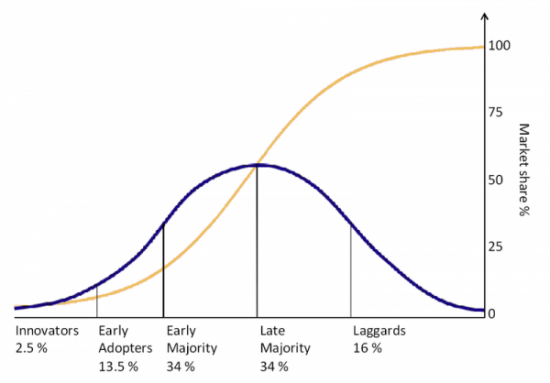 The Stages of Change Model was developed by Prochaska and DiClemente, and was originally based on extensive interviews with people who had overcome addictions to nicotine. This model is also know as the Transtheoretical Model, because it spanned so many different theories. This model recognizes that behavior change is a process rather than an event.

Behavior is shaped by the interaction of environment, the desired behavior and the characteristics of the person. The National Cancer Institute states that, “According to [Social Cognitive Theory], three main factors affect the likelihood that a person will change a health behavior: (1) self-efficacy, (2) goals, and (3) outcome expectancies. If individuals have a sense of personal agency or self- efficacy, they can change behaviors even when faced with obstacles. If they do not feel that they can exercise control over their health behavior, they are not motivated to act, or to persist through challenges. As a person adopts new behaviors, this causes changes in both the environment and in the person. Behavior is not simply a product of the environment and the person, and environment is not simply a product of the person and behavior.”

Additional Recommended Readings on Theory, by Level of Socio-Ecological Model

Theoretical Approaches and Frameworks for Violence Against Women Prevention – a Bibliography

Several researchers have conducted reviews of literature on violence against women prevention programs. These searches are often limited to published evidence-based practices.

The World Health Organization (WHO) and the Centers for Disease Control and Prevention (CDC) have articulated violence against women prevention using common public health approaches. Key concepts include the distinction between primary prevention , secondary prevention and tertiary prevention and the socio-ecological model.
These are best represented in the following publication.