Diffusion of responsibility:
“The concept of ‘diffusion of responsibility’ has been used…to explain why it is that individuals might be less likely to offer assistance to intervene to prevent a crime in a group setting. For example, Darely and Latane’s original (1968) study theorized that in group settings, the responsibility for intervening was diffused among the bystanders, such that individuals were less likely to feel responsible for taking action, and were more likely to think that somebody else may intervene or had already called for help.”

According to Darley and Latane (1970), bystanders go through the following five stages before determining what course of action they will take (to intervene or not): 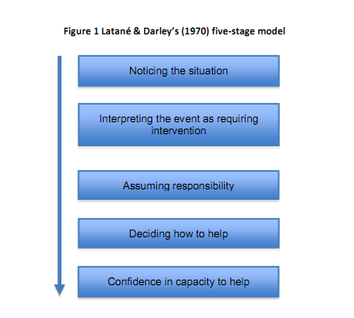